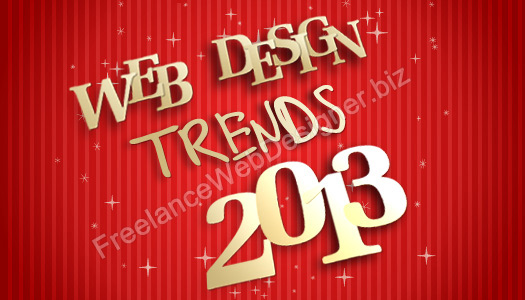 It is not just hype; how can we look back when there is nothing to look forward to? 2012 has been a golden year in terms of web designing. Without any doubt, the responsive design and Flash had become benchmarks to the World Wide Web, as well as others that are to be featured along the way.

Let the rumours be hushed as we highlight the cravings of the online community in terms of web design. It is not to spoil you, but I have come up with ten predictions that are certainly going to occupy the year 2013’s hot seats.

Obviously, the demand for responsive web design is going to be rampant this 2013, but we are also looking forward to the recreations and innovative instalments that will be released. It is expected that every year will be another walk in the park for the consumers as the market gets overwhelmed with new gadgets such as the iPad mini. These breakthroughs in Technology will otherwise be a challenge to the responsive design; can it indeed “respond” before the thin line gets cut-off?

I can see a future in the field of web designs with a better responsive interface that do not revolve around the compatibility to browsers and devices, but will instead be focused on the aesthetic value, as it is presumed as a raw design. Let the thin line be evaded without limiting ourselves with functionality.

2. Typography is the new darling of the spotlight.

Javascripts and image for designs had been the focus of attention in the past years. The impact of Typography had only been recently noticed, and the opening of a new year can prove to be a turning point for the emphasis of web type as a designing element. It doesn’t have to be more complicated just to complement an excellent layout. Nonetheless, the @font-face concept and some other applications have become very useful to support the effect of Typography on the entire design, influencing the font-weight compared to the default execution from the codes and the images.

As a matter of fact, it is simpler to use typography and matching layouts to make a responsive web design compared to using Javascripts and images. There are more options to come up with, so you do not have to be limited to the art of organizing such images and codes when you can play with the typography and add personality to your designs.

3. Anything but Flash for next-generation designs.

The only good thing left to site administrators is that they can charge it to experience—that is, being able to compete in the SEO realm. Good news for the academe which prefers quality reference articles, as well as bloggers who may now have the time to shine. Flash will be so yesterday because new gadgets do not support it, and with the daw of technology for comfort purposes, there is no room for painful updates and crash troubles every time. It is time to meet the basic ones, and they can again be optimized as they have always been excellently implied in the design elements. It’s like hitting two birds in one stone throw for the Javascripts, as well as for the HTML5 and/or CSS3.

It was confirmed that companies have began to let go of Flash since 2012. On a pre-emptive note, we can see the domino effect of this reality—less demand will result to fewer developers using it, and in turn companies who may want to still use it will find it difficult to have someone use it, and being forced into not using it, the trend would just decline.

Then, there’s Skeumorphism aging, too. Apple can be hesitant on this, but the idea itself is good to be dropped. There is an eagerness to change, progress, and crave for something new. Do we need to see a bookshelf to see the book we wanted to read? This might be one of those unpredictable ideas to work out; nonetheless, there is a lot of pressure on what will be replaced from the concept of a shelf. That goes for other similar concepts, too.

This is a good start, where originality is aimed for instead of creating replicas just to share the publicity and profit. Microsoft Metro and Apple might be one step ahead but at least they have proven that there is no place for copycats in 2013.

5. Visuals to impact go at the same rate: LARGE.

Although it contradicts the previous point, some web pages prefer to infuse the “large image, large impact” principle on their designs, and that is all right since they have the capacity to pay for it, all for the sake of excellent web design and purpose. And besides, there are modifications in the access of these sites. Web developers may or may not modify the usage of large images to load only on larger screens, and probably resize it on a smaller screen.

Thus, 2013 is not yet a farewell year to the imaging realm, especially when it comes to setting standards for web layouts. The trend has its own way to promote itself; there is a purpose that only they, so far, can really pull off. Or at least, we get to see them until the first half, we’ll never really know for sure.

Well, to let the other web elements speak for themselves, white space will splash all over the web. Frontrunners include Myspace, where a clean design aesthetic is achieved with the responsive style. It proves that there is never a dull moment with the white interface, especially in terms of functionality and appeal to content. Let the professional show what cannot be hidden in white.

Not all people are into blogs, or at least, not all of them have mastered the web functions. Thus, resorting to social media is a good resort, and this is already old news. To maximize the interaction and sharing of information and media, the integration of such realms has been a practice for the past year, although in 2013, the pressures for more social media integration will be rested and made available, at last.

It’s like an expansion of media sharing opportunities, and who would’ve imagined a mechanism called “pay by tweet” or “pay by status” just to access more information? Surely, the restlessness will be worth putting up for. For the advertisers, more funds will go to an earnest social media handling of their reputation. Also, these possibilities will extend to news sites having photo-editing applications, or even artist and web designers topping ranks and building reputations through Pinterest. The possibilities are endless!

8. Calm Colors are not anymore a setback.

Though it would be easier to claim that color trends just follow a cycle, the attitude for 2013 will go to subdued hues! Websites have already became pioneers, and more sites are changing skins! We can get some inspiration from the web developers of highly patronized websites as the rest of the cyber are updated.

Thus, watch out for the pale and light color schemes, blended with the dominance of white space or even to an extent there is no need to follow that one. Nonetheless, basic black, white and gray themes will be on default than the colored ones.

9. Mobile Apps shall fully be embraced versus mobile browsing.

The logic is simple: if developers make the app more user-friendly that the desktop sites, it’s a win-win for both the gadget selling companies and the designers who could get paid for such apps. Although there is a certain balance to this. Nonetheless, mobile browsing will be a deterrent thing to do.

This is true because people have been sing mobile browsing more often and it is time for the developers to show what they’ve got. With the convenience being the determining factor, the developers can leave you choosing and need not to say more.

Content has long been reigning the web designing arena, and such is still expected for this year, 2013. Bloggers will do anything just to increase traffic on their websites. Unfortunately, the community has had enough of the spinnings, and reading senseless articles. People deserve to read what matters, and what they see on the Internet indeed influences their future way of living. Thus, content is bound to reign and determine the rank of the pages for the year to come. Articles that are unique, significant and makes good sense will continue to be prioritize than web designs and innovations.

Thus, even web design infuses the aesthetics with the responsibilities of keeping the mindsets of artists, blogger and readers connected to each other by maintaining the integrity of blogs and articles that are posted online. As the responsive web design focuses on how pages are delivered, content shall be center of attention because of social media integration and the power of sharing, likes, etc. All the elements will work together to make sophisticated web pages for people to visit this 2013.

I think this would be the Top 10 Web Design Trends in 2013, what you say about it? I would like to hear your thoughts too.